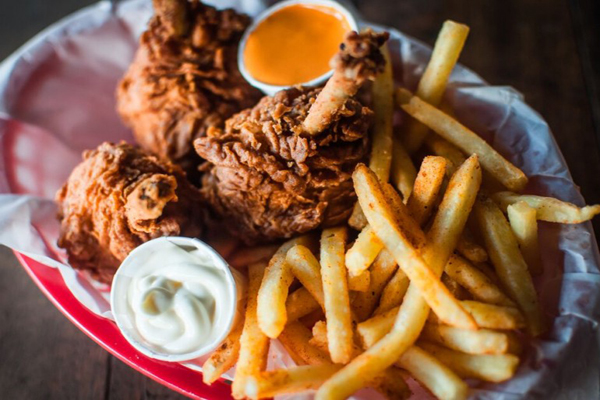 Some would say it's the best fried chicken in London, whilst others would say it's just clucking delicious. Either way, more of us can get in on the action with the launch of Mother Clucker at The Cat & Mutton. What.../ Usually found serving up in their converted US ambulance truck at the Truman Brewery, the fowl-mouthed eatery is delighted to announce a kitchen takeover at the historic Broadway Market pub, The Cat & Mutton. Menu.../ Experts in tea-brined, buttermilk soaked, fried deliciousness that has been keeping bellies full across the capital since 2013, the residency will see MC favourites such as mouthwatering chicken strips, wings and black eyed peas.  The menu also has a few additional treats, including fish gumbo and the ultimate take on the roast - beer can roast chicken served every Sunday. Where.../ The Cat & Mutton, 76 Broadway Market, London, E8 4QJ Find more information at www.catandmutton.com @motherclucker

Jacob Kenedy and Victor Hugo, owners of acclaimed Soho restaurant Bocca di Lupo and Gelupo gelateria have come together again for the launch of Vico. What.../ The new site is located at One Cambridge Circus, gateway to the popular Seven Dials, and offers accessible and affordable Italian street food, alongside award-winning Gelupo gelato. The large ground floor space also echos the convivial atmosphere of an Italian piazza, with minimal seating, carnival lighting and playful design. Chef and co-owner Jacob, renowned for delivering obscure and delicious food highlights from across Italy's 20 regions, will oversee the menus and operation at Vico as executive chef. Menu.../ For the most part, there isn't exactly a proper menu.  However, diners can expect pizza by the slice, a myriad of polpette and arancini, fried tidbits of Mediterranean seafood, tranches of torte salate and anything else the chefs can create based on available ingredients.  Drink will be as inexpensive and casual as the food – only house wine will be served, only by the carafe (125, 250 & 500ml sizes) alongside spritz, beer & soft drinks. Where.../ More information at www.eatvico.com Vico, 1 Cambridge Circus, London, WC2H 8PA @eatvico 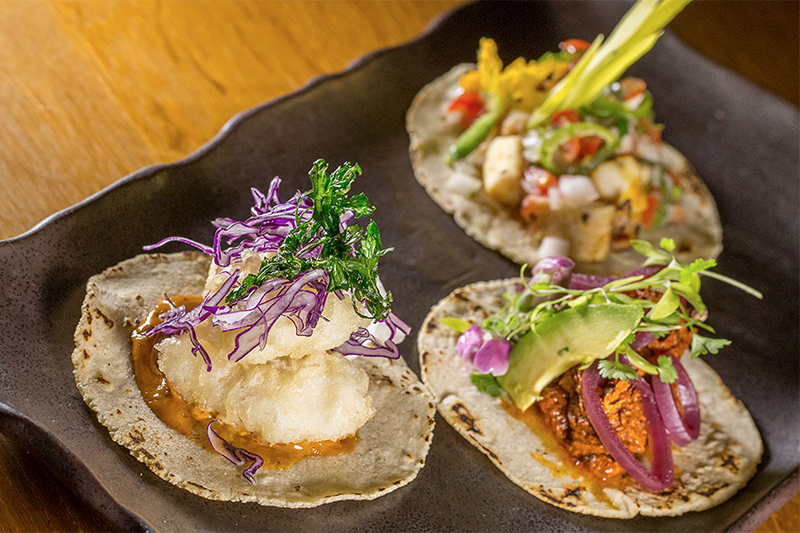 Marylebone's increasingly popular foodie hub sees the arrival of modern Mexican cuisine with the opening of Molé. What.../ Molé has launched to serve up both classic and experimental Mexican/South American cuisine and cocktails in a vibrant space.  The quirky interior features a living wall with lush greenery, distressed surfaces. hand-drawn wallpaper by the acclaimed Timorous Beasties, and quotes from Mexico's most famous female artist, Frida Kahlo adorning the walls. Menu.../ The Molé menu offers South American classics updated with modern cooking methods and ingredients.  Experimental tacos will also appear on the menu regularly, including creations such as Cod Cheeks with a Squid Ink Foam and Micro Leaf, and Slow Cooked Pork Belly with Pickled Watermelon and Sweet Miso. The drinks menu also takes South American influences including: Frida & Diego, a zingy blend of Ginger-infused tequila, homemade rose syrup, lime and cucumber, and the Guava Pisco Sour made with Molé's own guava compote, shaken with pisco, lime and Peruvian bitters. Where.../ Molé, 16 Picton Place, London, W1U 1BP More information at www.moletacobar.com @moletacobar

Street food sensations The Wild Game Co. have found a permanent home with the launch of Mac and Wild in Great Titchfield Street. What…/ Since bursting onto the London food scene four years ago, Andy and his tartan army have won ‘Street Food of the Year' at The Young British Foodies Awards, Best Signature Burger at the National Burger Awards 2015 and were named by The Evening Standard as one of the top five places to eat game in London. Diners will be taken on a journey to the Scottish highlands, enjoying the finest wild venison, game and seafood in a rustic setting.  Founded by Andy Waugh, who hails from just north of Inverness, all of their meat is sourced and then butchered with care by his family's game-butchering business, which has been around for over 30 years. On the menu…/ Check out the Veni-Moo - is a delicious mixture of a beef patty with a venison patty, bernaise sausce, cheese, caramelised onions with a beautifully made brioche bun.  The rest of the seasonally changing menu includes venison tartar, cured smoked scallops, venison steak, venison burgers with duck fat chips and whisky tipsy or horseradish toffee for dessert. The venue…/ The seventy-cover restaurant stays true to the rural ethos, with design features including original hardwood floors, stag heads mounted on the walls, a felled tree from Andy's parent estate provides the wood for the bar and tables and butchers hooks will hang from the ceiling. Downstairs will also feature a ‘wall of meat' where a variety of meats will cure and hang. Where.../ 65 Great Titchfield Street, London, W1W 7PS Tel: 020 7637 0510 www.macandwild.co.uk  / @macandwild

Guests will be treated to Squid Kitchen's twist on classic Madrid market snacks and produce - including Fiery Chorizo Stew, Godfather Peppers and Patatas Bravas topped with spicy tomato and paprika “Squid Vicious” sauce.  Squid Kitchen's daily sharing dishes will be complemented by special #FishFryDay offers on Friday nights, and Spanish-style all-day breakfast dishes on Saturdays and Sundays to enjoy with “Bottomless Brunch” Bloody Marys.   King & Co will pitch in with a range of refreshing craft beers to wash down the big flavours.